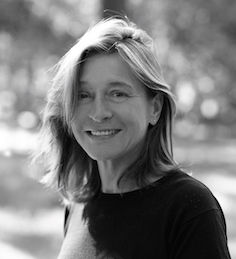 For our second lunch of the year, we have the pleasure of spending time with a renowned photographer, Sylvie Lancrenon.
Sylvie Lancrenon was a set photographer before becoming an artist in the intimate genre of portraiture. She worked for Claude Lelouch, Jean Becker, Pascal Thomas. On the shootings, she learned how to approach the stars without ever imposing herself. One step after another, one laugh after another. She needs to exchange smiles and laughter in order to work and be as close as possible to the truth.
When you look at her portraits, you get the feeling that she manages to capture those fleeting moments of abandonment, when a star like Isabelle Huppert, Nicole Garcia, or Isabelle Adjani, is simply there, in a sincere presence. But the image does not reflect the long process of preparation that precedes the image. Sylvie Lancrenon prepares the shot at length and, above all, she does everything to make her model forget that she is being photographed. Stars hate photos. Every picture is a story of abandonment. But until the end, nothing is ever taken for granted. That’s why Sylvie Lancrenon’s photographs are precious. Each one is a challenge taken up.
Her photographs are like a still film. You can sense that something happened before, that something will happen after, but what? To capture these moments of truth, Sylvie Lancrenon photographs without a tripod, by hand, circling around her moving model. Her soft focus is controlled. Everything is under control, except what the model will agree to give her.
During our lunch, Sylvie Lancrenon will present her photos of dancers from the Paris Opera, taken in the old Lotti Hotel under construction.
For a preview of her work, www.sylvielancrenon.com.
Share this post
Share on FacebookShare on Facebook Share on LinkedInShare on LinkedIn Share on WhatsAppShare on WhatsApp
Go to Top