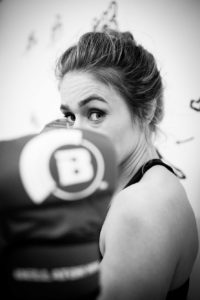 Féminin Pluriel, the global women’s network, is delighted to invite you to a physical emancipation clinic with Marloes Coenen, 3 times world champion in Mixed Martial Arts, on Saturday 2 March 2019 at 3 PM.

Specifically for Féminin Pluriel members, Marloes Coenen will share with us her life-long experience in releasing energy and finding your inner strength, to help us feel more empowered both from a physical and from a mental point of view. Her physical emancipation clinics are perfectly safe and do not require any pre-exiting knowledge of fighting-techniques nor any other type of physical
precondition. Just come as you are and be open to the transformation!
Location:
R-Grip
Tweede Kostverlorenkade 69
1053 SB Amsterdam
R.S.V.P. to amsterdam@femininpluriel.org
This is a members only event.
ABOUT MARLOES COENEN
At the age of 19 Marloes Coenen became the first female world champion in Mixed Martial Arts in Tokyo, Japan. Later she won two further world titles in the United States. She regards her life experiences in the cage as her greatest achievements in her career, “in the cage I felt freedom”. MMA is a multifaceted sport consisting of a combination of several fighting-sports with a logically constructed method connecting all the foundations together. The so-called Grip-method is based on strict didactical methods and guarantees a step-by-step build-up of the lessons, thus enabling everyone to become a Mixed Martial Artist in a safe and healthy manner, no matter how much experience you have, no matter how young or old.
According to Marloes, MMA entails so much more than just using the right hook or being able to do a double leg takedown. Thanks to MMA she discovered sides of herself which she never would have discovered without it. It is thanks to the cage that she become stronger, this is what she wants to teach everyone. Everybody has a fighter in them, only in some cases it is more hidden that in others. Taking of the layers of one’s personality is what Marloes regards as one of her biggest challenges when coaching and teaching, as the development of one’s character is just as important as the physical training.
Share this post
Share on FacebookShare on Facebook Share on LinkedInShare on LinkedIn Share on WhatsAppShare on WhatsApp
Go to Top