FP Côte Basque invites you to a privileged visit of the VILLA LEÏHORRA dating from 1926, thousandth listed Historical Monument of the XXth century.

Between sea and mountains, Ciboure or the charm of a small seaside resort nestled in the heart of the splendid bay of Saint-Jean-de-Luz. Facing the royal city that welcomed Louis XIV at the time of his marriage in 1643, Ciboure also offers a heritage not less illustrious with the fort of Socoa, a military work built by Vauban, the Convent of Recollets where King Louis XIV was to hear The Mass, the Tower of Bordagain, the remains of an old fortified church, the birthplace of Maurice Ravel (1875-1937), the tomb of Pierre Benoît (1886-1962), author of Atlantis and Mademoiselle de La Ferté and Villa Art deco Leïhorra.

If you are sensitive to harmony, if you like Art Deco architecture, if you like calm and take your time, if you like places of exception … then you will love Leïhorra. Expression of a refined art of life, it is addressed to those who are attached to “beautiful things” and who seek authenticity and harmony and who will appreciate and preserve a heritage that belongs to future generations.

Villa Leïhorra enjoys an exceptional situation: facing the Atlantic Ocean, it is a jewel of Art Deco architecture of the Roaring Twenties which has no equivalent in the Basque Country.

The architect Joseph Hiriart, the son-in-law of Madame Caroline Signoret, the owner of the villa, has a carte blanche to build, according to her mother-in-law’s wishes, the most beautiful villa on the Basque Coast. True “refuge on dry land”, translation of the Basque word Leïhorra, it is a true dialogue between the sky and the sea. Located on the hill of Bordagain, it offers an unforgettable panorama. The establishment of the villa from east to west according to the march of the sun crosses the north-south axis of the basins.

It remains the absolute art deco manifesto wanted by its creator. Everything from the villa to its smallest detail was designed by the architect Joseph Hiriart who invented volumes, proportions and shapes, composed of tiles, mosaics, parquet floors, cremones, chandeliers, wall lamps, furniture. It is joined by Art Deco artists and local artisans, including master-glassmaker Jacques Gruber, ceramist Cazaux, René Prou, Daum glassmaker, landscapers Gelos and ironworker Jean Schwartz. It is one of the very rare examples of private dwellings of Art Deco style and period. The villa Leïhorra is one of those total works of art that give the feeling of accomplishment. 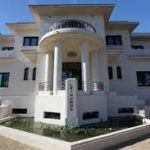 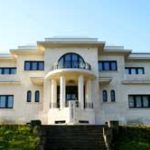 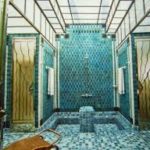 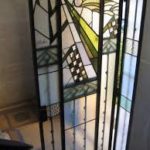