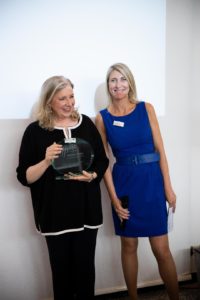 Four women have been awarded during the 2019 Féminin Pluriel Congress in Geneva.  Yoyo Maeght received the Award from Alexandra Origet du Cluzeau, President of Féminin Pluriel. A French publisher, a gallery owner, and a curator, Yoyo is the granddaughter of the gallery owner and patron Aimé Maeght, who created the Marguerite and Aimé Maeght Foundation, in Saint-Paul-de-Vence. Yoyo is a curator and exposition commissioner of modern art and contemporary art, as well as an author of several works on Art.

In 2002, Yoyo  became a Board Director of the Maeght Foundation in Saint-Paul-de-Vence, in charge of the development and communication of Maeght companies. In 2010, she directed the exhibition “Giacometti & Maeght” which remains the greatest success in the history of the foundation.

Yoyo is also an organizer of exhibitions linking Asia and the West. Since 2005, she has specialized in the organization of artistic events for Chinese museums, including the imperial museum of the Forbidden City of Beijing. She has curated several exhibitions, including the first Miró exhibition in Turkey, and in China. Yoyo also collaborates on retrospectives presented by the Royal Academy of London, the Munster Museum, and the Pera Museum in Istanbul. The FP Award is in recognition of her truly innovative work for the international art scene.

Christina Moreno is an international lawyer who overcame poverty herself as a teenage mother and dedicated her life to supporting refugee women to regain control of their lives.

Two years ago, Christina quit her job to set up SHE MATTERS – a social enterprise recruitment agency with a mission to empower refugee and migrant women to enter the labor market. Through their gender-specific programming, they offer the support they need to build their social and economic capital, boost their self-confidence and become leaders in their homes, businesses, and communities. Prior to establishing SHE MATTERS, Christina worked as a legal associate and head of communications at an international legal partnership specializing in on-the-ground international humanitarian and human rights issues in conflict-affected areas. Christina was also with HiiL Innovating Justice where she worked to improve access to justice across the globe. Christina is a Thomson Reuter’s Foundation Trust Conference Scholar for her work on women’s empowerment and was named among the top 10 ‘Persons to Watch in 2018 for Justice Innovation’ by HiiL’s Innovating Justice Accelerator. This award is for her commitment and her actions for Women’s dignity and empowerment.

Celine Van Till is a Swiss elite sportswoman, an international speaker who has converted from horse riding to athletics in 2018, and took on a new challenge after the Paralympic Games in Rio 2016: to participate in the 2020 Paralympic Games in Tokyo for the 100m sprint. We wish her the best of luck for that!

Céline is an Ambassador for people with disabilities and the author of the book “Step by Step”. Céline is also a Founder of the Association “Tout est Possible” (Everything is Possible), where she supports sport and disability and is an international speaker. She is also a member of the Board of Directors at Handicap International and highly involved in the field of Associations. She has a Bachelor’s degree in Marketing Management for elite athletes, before turning to the International Olympic Committee where she began her professional career in 2015. At 27, Céline received the Medal “Genève Reconnaissante” from the hands of the Mayor of Geneva.  This award is for her courage, her resilience and her sense of giving.

Béril Gurdogan is a Swiss Senior Attorney, Legal at Global Foundries. As an expert of negotiation, Béril’s talent shines even more in complex situations. After a Law Masters at the University of Geneva, Béril started her career at Crédit Suisse as a Counsel. She joined IBM as a Senior Contract Negotiator, then Senior Negotiator, before she was nominated at her current position in Global Foundries. You would think that such a high octane career kept Béril busy. You are wrong. When she accepted to be the President of Féminin Pluriel Geneva in 2018, I was confident that I was leaving the Club in good hands. I had no idea that she would take it to a totally new level in less than a year. One of her former bosses said, I quote ” She is a delight to work with and is a person of integrity”.This award is for her amazing organization talents, her ability to federate talents  and her incredible engagement to promote the values of Féminin Pluriel.