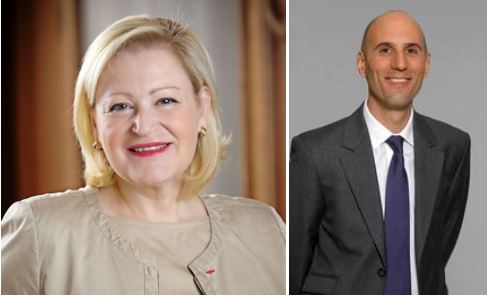 America facing the world: an attempt to decipher the « Trumpian” chaos
The Trump Presidency is shaking us up, the trade war with China is raging, Brexit has been on the front page for a year now …….
Our two speakers Valérie Plagnol and Samy Chaar, both distinguished economists, rejected and passionate, will shed some light to help us understand the current political and economic environment, just 3 weeks before the US mid-term elections in the United States.

The debate is bright between these two beautiful and brilliant personalities. Prepare your questions !

Founder and CEO of Vison & Perspectives, a consulting company, she advises several institutions such as the French consulting group BIPE as chief Economist, the Cercle des Epargnants Association, for Generali France, which she chairs, the Conservateur –
a mutual insurance company. A fellow at the Werthstein a fintech robot advisor, in charge developing the French market, and chief tech economist to Techfoliance, a fintech information platform, she advises several institutions on macroeconomic and investment trends. She teaches economics at EDHEC school of business.

Ms. Plagnol, appointed by the President of the French Senate, is serving a five-year term as a member of the High Council of Public Finances in charge of “examining the soundness of the macroeconomic forecast and potential growth estimates on which draft finance laws are based”.

Formerly President of the Société d’Economie Politique (France, she is a member of the Scientific Committee of the Foundation Robert Schumann, she is a member of the Confercence of Business Economists (CBE) in Washington DC. She writes regular commentaries on global economics, asset allocation, as well as topical studies. Ms. Plagnol meets regularly with clients, addresses conferences, groups, and presents analyses and action points on key economic and capital market trends.

From 2006 to 2011 Ms. Plagnol served on the Conseil d’Analyse Economique (“Wise Men”) to the French Prime Minister. During her tenure she co-authored a study on French housing sector and the first study exploring the impact of the emerging Chinese economy on France.
Prior to serving at Credit Suisse private bank between 2010 and 2014, Valerie Plagnol was Head of Strategy for CIC Securities Paris (2001 – 2010), Chief Strategist for HSBC France, in addition to roles at Credit Suisse First Boston (London), and Nomura Securities (Tokyo).

Samy Chaar is Chef Economist at Lombard Odier and a voting member of the Lombard Odier Investment Committee. In this role, he is leading a team that formulates the bank’s macroeconomic insights and analyses economic forecasts (growth, economic trends and cycles, inflation, balance of payments, central banks action, financial conditions, major geopolitical events & their impact on the markets).

Samy joined Lombard & Odier in 2006. He holds a PhD in economics and a degree from the Paris II Pantheon-Assas & Paris IX Dauphine Universities. He was a researcher in the economics department of the IRGEI Institute, whilst teaching at the Paris IX Dauphine and Paris II Pantheon–Assas Universities. From 1999 to 2002 Samy worked in Asia with the Crédit Agricole Group, first with W.I. Securities in Tokyo and then in asset management in Hong Kong, after which he returned to Paris to prepare for his doctorate.