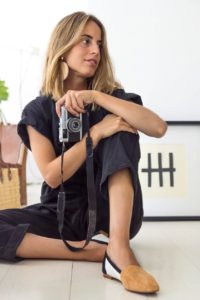 Dear associates and friends, we have the pleasure to invite you to the next Feminin Pluriel Madrid event, held on March 20, at 2:30 p.m. at 1001 Atmoshpera, Paseo de la Habana 24. On this occasion we have the privilege of having of Berta Bernad as our guest, creative director, photographer and image consultant.

This young 30 year old from Madrid started with her own blog in 2011 and grew in her career after being named by Scott Schuman as one of the “global taste makers” with the most international projection of Spain. In 2012 she received the prize for the best digital communicator for the newspaper La Razón and was also awarded during the Zeleb Awards as one of the best trendsetter in the world of fashion.

Berta studied journalism at the Complutense University of Madrid and worked in London in the marketing department of Ralph Lauren while collaborating with brands such as Estee Lauder, Aristocrazy, Massimo Dutti and Hermès. She is an entrepreneur and visionary, who launched her own decoration project -Curatedby- while living in New York, and her own collection of dresses for the Mimoki brand.

Her creative eco-minimal style has been reflected in infinity brands such as Malababa, Marlota or ByFarShoes. Currently, through her studio named “Mindlike”, she is taking the creative direction of El Corte Inglés luxury project.

Berta decided to close her own Instagram profile in May 2017 with 98 million followers to dedicate entirely to her novel and to start her new career in the publishing world. On April 9, she launches her novel: “My name is Greta Godoy” with the publisher Planeta. A novel full of values ​​that demonstrates the passionate portrait of a society marked by social networks, which emphasizes the emotional traces that exist in the life of an influential person.