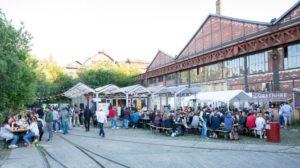 FP Hauts-de-France is delighted to invite you to Fives Cail : from a food wasteland of 1,200m2 to an 25ha urban project

By creating an ephemeral and event space (Friche Gourmande), nearly 120,000 visitors came in 2 years on the site of Fives Cail. A prefiguration of a remarkable project on an extraordinary former industrial site, whose architectural power provokes admiration and triggers the imagination.
Fives Cail manufactures an ecodistrict that invents new ways of living the city, in connection with the Lille district and the associated town of Hellemmes in which it joins and with those who will occupy it, will live there, will work there… Fives Cail, once the flagship of metallurgy, became the factory of possibilities.

Fabienne Duwez worked on prefiguring the social development of neighbourhoods and then led northern projects within the SCET. For two decades, she has led the SEM SORELI, paying close attention to the general interest. SORELI is now the developer of many urban projects in Lille such as the Haute-Deûle shores (Euratechnologies), South Lille and Fives Cail.

Looking forward to seeing you…

Any reservation cancelled 48 hours before dinner remains due.