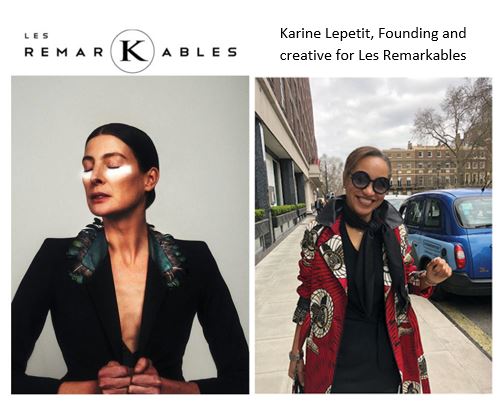 A preview of the collection LesREMARKABLES will take place in Geneva in the presence of the designer, Karine LEPETIT.

Models will unveil her exclusive creations in a private and unique fashion show.

Kindly take note: LIMITED EDITION ONLY! One article per size and per creation.

Karine Lepetit, from show-business to fashion

Everything began through classical dance. Karine grew up in Caen, in the province of Normandy. Her life as a little girl and teenager was punctuated by dance and piano. Years of intensive training allowed her to fulfill her dream of becoming a professional dancer in Paris.

Her beginnings as a dancer and singer on television took place alongside Vanessa Paradis, Mylène Farmer, Sylvie Vartan, and others. Later she joined the company So What !, presented various TV programs and also became casting director for such shows as the Star Academy, Eurovision etc.

When show-business is an integral part of your being, the way you dress is also a way of putting yourself on stage. Take a look at this eye-catching wax jacket worn by Karine on the picture to the right, which the designer created during her travels to Senegal.

The story of this jacket took Karine to New York, the city where everything is possible. Karine met Stella McCartney here, who was a decisive influence for the rest of her career.

A few months after this fortuitous encounter, Les Remarkables was presented on stage by the label’s exquisite muse, Marie-Agnès Gillot, lead dancer of the Paris Opera.

Karine is now ready for a new “Fashion Adventure”. The curtain opens in the city of Geneva, the designer’s adopted city that allows her to recharge and find inspiration for her creations.