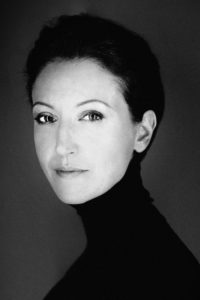 Feminin Pluriel, the global women’s network, is delighted to invite you to a jewellery workshop with Caterina Occhio, the founder and CEO of SeeMe, and Chief Sustainability Officer at Trussardi. The event will take place on January 21, 2020 at 18:30.

SeeMe is a fair trade verified brand that produces heart shaped jewelry and accessories and provides ethical sourcing for other fashion brands. All of its pieces are handmade by women survivors of violence.

SeeMe was born while walking through the souks and back streets of Tunis. After almost two decades of reporting on women’s conditions in the Middle East and North African regions Caterina Occhio, SeeMe’s founder, decided to take matters in her own hands. Through her reports and travels she, unsurprisingly, discovered that being a single mother in the region equals being unsuitable for work, for marriage and for society. SeeMe was therefore born as a safe haven, training centre and work place for women otherwise deemed lost.

SeeMe employs women, often single mothers, who have suffered violence and were ostracized from their communities. Through training SeeMe women learn the craft of jewellery making following ancient Tunisian techniques. Therefore, while fostering their country’s traditions they also secure a workplace for themselves and a future for their families.

Caterina Occhio, founder and CEO of SeeMe, is a former development aid manager with over 15 years experience in supporting employment and institutional reform. She worked extensively for the European Commission, different UN agencies and, from 2002, she specialised in the socio-economic integration of women.

In 2007, Occhio became the secretary-general of the SEED Foundation and led two projects supporting socio-economic insertion of disadvantaged women in Turkey. Both endeavours were elected as best practice by the Dutch Minister of Foreign Affairs. In 2008 she was the leader of the team charged of improving the effectiveness of external aid within the European Commission. In 2010 she was EU Policy adviser for social inclusion for the new employment strategy in Tunisia.

In her quest to help and improve women’s conditions in the MENA region, in 2013 Occhio took a leap of faith and launched SeeMe. Occhio, as well as being the main designer of the jewellery and ensuring aesthetic cohesion within the brand, is also involved in all other aspects of the business.

THIS IS A MEMBERS ONLY EVENT!

Please RSVP to amsterdam@femininpluriel.org by 15 January 2020.