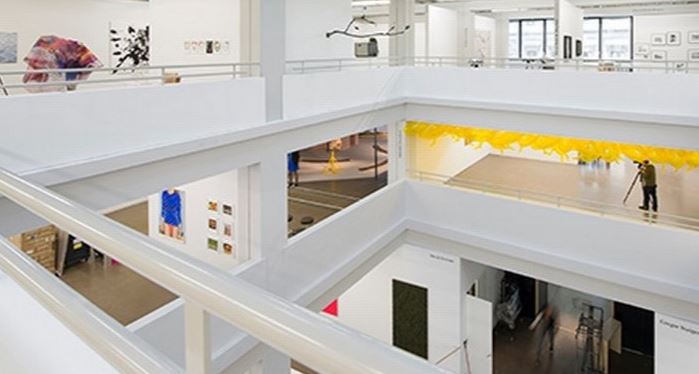 Féminin Pluriel Amsterdam & Féminin Pluriel Brussels are delighted to invite you to a Guided Tour of Independent Brussels with The Merchant House on Friday the 9th of November 2018 at 6.30 pm!

Independent Brussels 2018 – art fair, exhibition, and platform for curators all in one – takes place in the Vanderborght Building in Brussels, paragon of architectural modernism. As an inspired participant of this young and critical fair, TMH advances its interest in the contemporary art object and its emergence in a performative act. It will present the works of Pino Pinelli and of two young artists, Elsa Tomkowiak and Mary Sue.

Please join us on this special occasion bringing together two local clubs – FP Brussels and FP Amsterdam – to discover the newest positions in contemporary art.

Independent was conceived in NY in 2009 by Elizabeth Dee, Darren Flook, Matthew Higgs and Laura Mitterrand, with a consortium of like-minded commercial and nonprofit galleries. Following the critical success of the first three editions, in 2014 Independent launched Independent Projects—a two-week platform of solo exhibitions during New York’s auction week in November 2014.

In 2016 Independent Brussels was inaugurated at the historic Vanderborght, a former department store in the center of Brussels, Belgium. The project was founded by the City of Brussels in collaboration with founders Elizabeth Dee and Laura Mitterrand. This unique partnership with the Ministry of Culture and the City of Brussels has allowed for further support of the European ecosystem for galleries internationally.

“The concept of Independent deliberately disrupts the standard fair model: it is invitation-only, there are no booths, and the venue allows an easy flow between the displays.” –Financial Times

ABOUT THE MERCHANT HOUSE

The Merchant House presents contemporary art projects with sales of art as a funding strategy. Each project, curated by TMH’s Founding Artistic Director Marsha Plotnitsky, brings together an extended exhibition, cultural and research events, and a dedicated catalogue/artist’s book.

TMH has showcased international and Dutch innovators, such as Henk Peeters, Jan Schoonhoven, André de Jong, Chuck Close, Carolee Schneemann, Hilarius Hofstede, Craigie Horsfield, Judit Reigl, and Pino Pinelli, as well as young talent. Since it opened its doors in a historical canal house in Amsterdam in 2013, it has become known as a modern take on the Dutch tradition of a merchant—a vibrant art space freely open to the public.