FP Amsterdam – Thursday 28th March 2019 – An Interior Design Event, with a talk and a tour by Wilhelmine van Aerssen 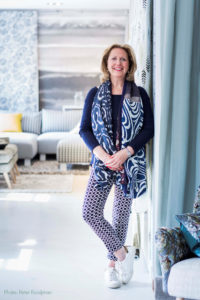 Feminin Pluriel, the global women’s network, is delighted to invite you to an Interior Design Event, with a talk and a tour by Wilhelmine van Aerssen at her famous showroom on Thursday 28 March 2019, at 18.30 at Hoogte Kadijk 143-F2-3, Amsterdam.

Wilhelmine van Aerssen opened her company in 1981, during a time when women establishing their own business was not very common. She had a clear goal in front of her: making the Netherlands more beautiful. During her many years of working abroad she noticed that other countries had a very different approach and relationship towards interiors and furnishing. The grandeur she saw in countries such as England or France was hard to find back home.

While interest in interior remained unchanged in the Netherlands, Wilhelmine found inspiration in Tricia Guild, the founder and creative director of Designers Guild, a British home and lifestyle company. Guild’s success and enthusiasm motivated Wilhelmine to start her own business and she soon became the first official agent of the brand in the Netherlands, followed by Nobilis and Osborne & Little the same year.

As an expert on textiles, Wilhelmine published Stoffen in het interieur, een handboek in 2017. The book not only focuses on the history of different fabrics, but also offers inspiration and instructions when choosing fabrics for your interior.

Wilhelmine van Aerssen Agenturen was founded in 1981 and soon grew to be one of the most important agencies in the Netherlands. They now represents 18 top brands and deal not only with fabrics but also wallpaper, furniture and home accessories. The showroom, with more than 700 square meters of fabrics, is usually open only for the retail trade, but will now welcome Féminin Pluriel Amsterdam and take us on a journey into the world of luxury fabrics and furnishings.